Sand Cat or Felis Margartia is the ruler of the desert environment, true blue dweller of this arid region. They are capable to adapt to the harsh weather of the desert making them completely at home here. These specialists of the desert reside in regions where there is some vegetation that is able to support animals like rodents and snakes like sand vipers on which these cats prey.

Their bodies are completely adapted to suit the extreme weather of the desert, live with limited water and to adapt to the cold and hot weather conditions. Sand cats are very similar to a domestic cat weighing not more than 7 pounds. The large, triangular and sensitive ears of this predator enable them to locate their prey like rodents even from under the sand.

The foot pads are covered with thick hair to tread easily on moving sands and also to insulate the feet from the surface heat. Sand cat fur ranges from light brown to light grey with faint lines on their limbs and small black rings on the tip of their tail. A dark red line runs from the corner of their eyes to the cheek and the fur pattern varies between six sub species.

There is a mention of the Sand dune cats in Koran where a sand cat accompanied the Prophet Mohammed and his daughter while they were travelling in the desert. Though found in Sahara desert, these cats are also found in Turkmenistan, Iran and Pakistan. Though, discovered in the year 1858, by a French Naturalist Victor Loche in the Algerian Sahara, this cat breed has become endangered since 2002 and their numbers are on a constant decline. This cat breed was named after Jean Augustine Marguerite who headed an expedition to the region.

Sand Cats are the most difficult to study cat breeds in the wild. This endangered breed is found in the Sahara desert of North Africa, Middle Eastern countries and even in Central Asia. They occupy areas in the desert that has small shrubs and receive rainfall less than 20mm a year. This highly adaptable cat breed is able to withstand harsh weather patterns of the desert with ease. They are comfortable at below freezing temperatures as well as in hot temperatures that range to 100 F.

Sand Cats are gifted with a strong sense of hearing, which enables them to locate preys like rodents, snakes and insects on and below the sand. They are even known to kill and eat poisonous snakes like Sand viper. They don’t need water and can survive on liquids found on their prey. On the other hand, this cat has to protect itself from animals like jackals, snakes and Owls.

They are excellent diggers and stay in burrows that they dig beneath the sand, which allows them to stay cool. These desert dwellers can easily blend with their surroundings and are nocturnal and solitary animals. They come together only for breeding and are able to survive the condition by consuming less water.

The special coverings on their feet allow them to walk on the moving sands without sinking, leaving absolutely no foot marks. The solitary nature of this cat makes them very difficult to study. They tend to close their eyes when a light is shone on them preventing the reflection, which makes it almost impossible to track them. These cats become active at night and most of the hunting is done after dusk.

They are the most difficult cats to breed in captivity with more than 4 cats out of 10 dying at a tender age. Usually these cats give birth to three kittens or less similar to a domestic cat. The kittens are blind at birth and weigh between 40 to 80 grams. They grow very fast and attain sexual maturity by 14 months of age.

The primary threat of these near threatened cat species is humans, increasing size of the human habitat and the rapid decrease in preys. These docile cats are less aggressive, which is one of the prime reasons why they were being widely hunted as a sporting activity. This has led to a drastic decrease in their population, which encouraged several countries to implement laws to protect this cat.

There are less than 200 of these cats currently in zoos worldwide. Hunting has been prohibited in several countries like Tunisia, Pakistan, Kazakhstan, Algeria, Iran and Israel. Trade of Sand cat products has been strictly prohibited, which has led to a slight improvement in their population.

Sand Dune Cats weigh between 4 to 8 pounds and can reach lengths of 30-35 inches. They have dense and soft fur that is gray or light brown in color on the top. The bottom fur has a lighter shade. The thick coat insulates them from the varying high and low temperatures of the desert. They have a broad head with large and triangular ears, which allows them to hear even the faintest of sounds.

There is a reddish line that runs from its eyes to the cheek. The black tipped ears are reddish brown in color. The body is covered with light stripes and also has black bands that run around the top of the front legs. The tail has two or three black rings on its tip.

For insulation and to protect from the hot sands, their feet are covered with a thick layer of hair. This unique feature protects their feet from extreme cold and hot sands while hunting down prey and for quicker movement on the moving sands. They are expert diggers and lack sharp claws for lack of places where they can sharpen them.

These cats are solitary and docile animals and come together only for breeding. They venture out only in the dark for hunting and tend to hide in burrows in the daytime. They are less aggressive, but can travel up to five miles for hunting their prey. This cat breeds trusts humans, but their personality in the wild is unknown.

Since these cats are expert desert dwellers their body is more suitable to bear the harsh weather pattern of the desert. They can survive on very little water or even no water and gain the liquid from their prey. In wild these cats are very robust and healthy as compared to the domestic cats. In captivity they are more prone to upper respiratory tract infections, which is the main cause of their death. To prevent any infections these cats need to be kept in arid enclosures where there is no major fluctuations in temperature and humidity.

This cat breed is friendly with humans especially in captivity. They trust humans and need some activity or else they can get depressed if they have nothing else to do. They are generally smart and like to investigate things. In wild these cats are docile and come out only after dark.

This is a wild cat breed and is not suitable to be kept as pets. They are either found in captivity where they are bred and taken care to increase their population. In wild, these cats are almost extinct in many countries, which have led to various conservation efforts.

Sand Cat with Children and Pets

As we have discussed earlier these cats are docile and less aggressive, but since they are wild cats they are usually not domesticated.

These cats are small and stout with short legs and a long tail. The length ranges between 40 to 52 cms with a 10 to 12 inch long tail. They weigh between 4 to 8 pounds.

They usually live up to 13 years in captivity, but they have high mortality rate during the infant stage. Their life expectancy in the wild has not been documented as studying this cat in the wild is extremely difficult due to their shy nature and nocturnal habits.

Victor Loche a French naturalist was the first to document and describe this cat breed in the year 1858. There is a mention of this cat breed even in the Koran, but the exact country of origin of this endangered cat breed is not clear. Sand Cats are found in wild and captivity in Saharan deserts, Kazakhstan, Pakistan, Israel, Middle East and in Iran.

They hunt for prey by digging and are real experts at that. Their strong hearing sense allows them to identify their prey even underground and around the bushes. Their main diet consists of lizards, snakes, rodents and birds. In fact, these cats don’t sit and wait for their prey, but hunt them by watching and hearing the movements. They can even travel for five kilometers a day for their hunt. They cover larger areas as compared to the domestic cats.

It is nearly impossible to purchase or find a sand cat on sale. Usually they are not kept as pets due to their shy nature. Most countries do not allow people to domesticate these wild cats and if it is legally allowed you may need to obtain a lot of legal permits to keep sand cats at home.

This Near Threatened cat breed needs conservation and care to prevent their population from dying out in the wild. We can contribute to their growth by helping various organizations that are working towards protecting this unique wild cat species. 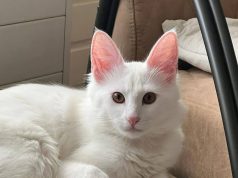